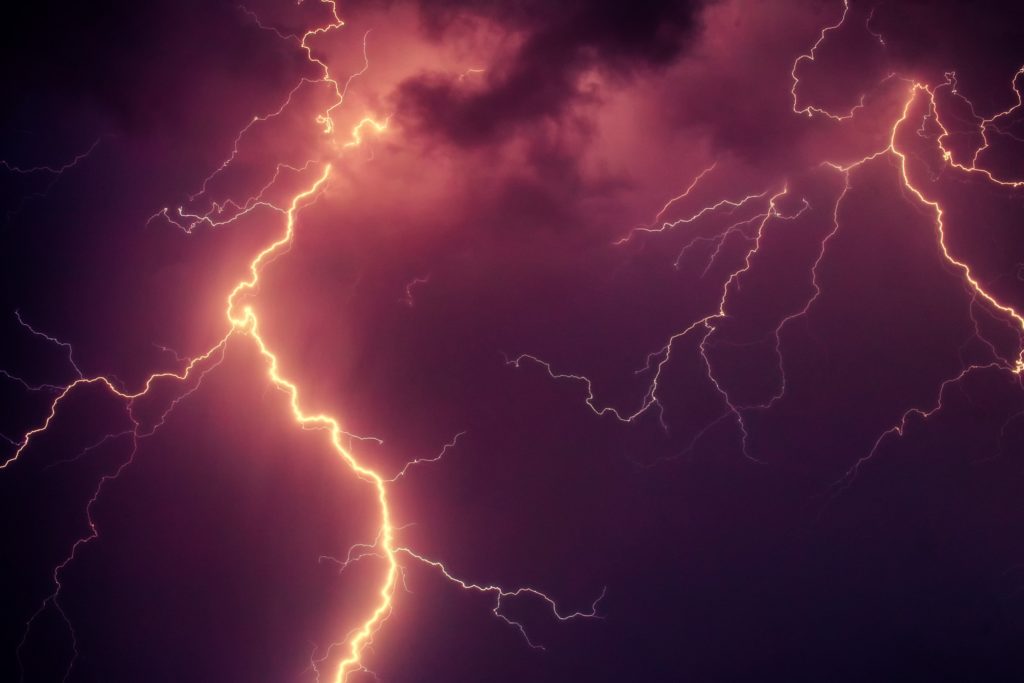 When thunder roars, go indoors — the National Weather Service has long used that phrase to remind people to go inside when thunder is heard as a safety measure against being hurt or killed by lightning.

So far in 2019, ten people have died nationwide. Two lightning fatalities were reported in Florida and two in Pennsylvania. One each came from Alabama, Colorado, Indiana, Kentucky, South Carolina and Texas.

Two were females and the rest were males. Statistics show males are more likely to be struck than women are, mostly because men spend more time doing outdoor activities. In fact, being outdoors was the biggest thing in common with all the victims, who have died so far this year.

A 48-year-old man in Junction, Texas was camping when lightning struck and killed him. Two 18-year-olds, one male and one female, were fishing on a lake at a park in Westmoreland County Pennsylvania. A 59-year-old man in Africatown, Alabama was on a ladder working on the roof at his mother’s house.

A 41-year-old woman in Murray, Kentucky was walking in a parking lot. A 44-year-old man was sitting in the river at Lawshee Plantation in South Carolina. A 36-year-old man in Boulder County, Colorado was hiking and a 65-year-old man in Bremen, Indiana was boating at a lake.

One of the two in Florida died June 9 when the top of his helmet was struck by lightning as he was riding his Harley Davidson motorcycle on Interstate-95 in Volusia County. Florida Highway Patrol said Benjamin Austin Lee, 45, of Charlotte, North Carolina lost control of his motorcycle and was ejected. He died at the scene.

The second death in Florida occurred July 24 when a New Port Richey man, who was struck by lightning July 21, died at a local hospital. Garry L. Perks, 32, was in the beach area behind Frenchy’s Rockaway Grill, 7 Rockaway St. on Clearwater Beach, when he suffered a direct lightning strike and went into cardiac arrest. Seven others were injured as well.

Lightning is a major cause of storm related deaths in the United States, NWS says. About 10% of people who are struck by lightning are killed, leaving 90% with various degrees of disability. In the last 10 years (2009-2018), the U.S. has averaged 27 lightning fatalities a year.

In 2018, 20 deaths were reported with seven of them in Florida. According to Florida State University, Florida is the lightning capital. Florida accounts for 16% of the average annual fatalities in the United States.

“While the most frequent lightning strikes occur in the Tampa Bay area, the chance of being struck by lightning in Florida is 1 in 3,000 over the course of a lifetime,” FSU says on its emergency management page at https://emergency.fsu.edu/resources/hazards/lightning.

So how do you reduce your chances of being struck by lightning? The best advice is when it roars (you hear thunder), go indoors immediately.

NWS says if you can hear thunder, you are close enough to be struck by lightning. You should seek shelter immediately in a sturdy building or a hard-topped vehicle with the windows rolled up.

When indoors, refrain from using corded appliances or other equipment or facilities that put you in contact with electrical systems or plumbing. Stay away from windows and doors and stay off porches. Do not lie on concrete floors or lean on concrete walls.

NWS says to stay inside until the storms have moved away and thunder is no longer audible since “lightning can and occasionally does strike well away from the thunderstorm itself.”

All the people who have died thus far this year were outdoors. And some likely didn’t have ready access to a structure or hard-topped vehicle. If that’s the case, NWS has some advice. First, do not seek shelter under tall, isolated trees or partially enclosed structures, which will make you more vulnerable to lightning. Do not lie on the ground. Get out of and away from water. Stay away from things that conduct electricity, such as power lines or metal fences.

If someone has been struck by lightning, call 911. Start CPR if needed. The sooner medical care is given the better the chances of survival and prevention of serious effects. Lightning victims do not carry a charge, so it is safe to touch them.