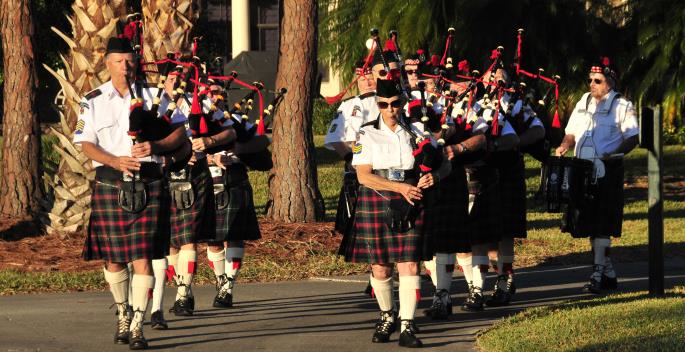 LARGO — The sound of bagpipes was out of place on a Wednesday morning.

“My wife and I had taken the dog for a walk in John S. Taylor Park in Largo, and when I stopped the car I heard bagpipes,” said Steven Lowrie, who had just moved to Largo from Scotland with his wife, Chris. “I said to myself, ‘I don’t think so …’”

Lowrie, who learned to play snare drum for a bagpipe band when he was an Edinburgh teenager, found the source of the tunes: a few members of the St. Andrew’s Pipes & Drums of Tampa Bay were practicing in one of the park’s pavilions.

“I found it a little unlikely that someone would be playing pipes at 9 o’clock in the morning,” Lowrie said in his honestly earned Scottish accent.

His wife blurted out, “My husband is a Scottish drummer!” and Lowrie stood there, knowing it was too late.

Lowrie joined the band and now serves as its treasurer.

That was three years and more than a hundred performances ago, and now, in the days before St. Patrick’s Day 2019, Lowrie wants everyone to know the St. Andrew’s bagpipers want you to join them, bagpipes or drums, pick your instrument.

“Our members will teach anyone who wants to join, and most of the players can teach,” Lowrie said.

The 16-piece band, consisting of bagpipers and base, tenor, and snare drummers, consists of locals as well as many snow birds from Canada, Detroit, New Jersey and other chilly winter places.

The band, which is celebrating its 50th year, has performed just about everywhere in the Tampa Bay area. They’ve played at Winterfest in Indian Rocks Beach, Bay Area Renaissance Festival, the Tampa Bay RV Show at Florida Fairgrounds, even a quilt show in Seminole. They’ll play in three locations on St. Patrick’s Day; the Three Birds Tavern and the Pesky Pelican Brew Pub, both in St. Petersburg, and at Mickey Quinn’s Pub in Seminole.

The band wants prospective members to know it’s all about having fun.

“We’re very patient, none of us learned how to play bagpipes or drums in a day,” Lowrie said. “Some of these guys have been playing for 50 years and that makes for a very friendly, relaxed organization. We want to play well and want people to enjoy playing and people to enjoy hearing us play.”

Bagpipe and drum corps, bagpipe bands, however one refers to them, are not just for men, though bagpipes share a long tradition with police and fire departments in the United States, Canada, Europe, Australia, and elsewhere.

“It’s always been very traditional in Scotland more than here, that police and fire services have their own pipe bands, tons of them,” he said. “We’re trying to create a connection with both the Largo police and the firefighting organizations to see if we can get them involved.”

That being said, Erla Richardson, a female member of St. Andrew’s Pipes & Drums, is one of the many women who play in traditional Scottish bands.

“I played with the Boise Highlanders for 20 years before moving back to Florida,” Richardson said. “There were six women in that band. There used to be a band in Portland, Oregon, called The Portland Ladies. That was all women, even the drummers and the drum major.”

“Women are welcome to join too,” Lowrie said. “You’d be surprised how many women there are in all sorts of pipe bands, there are a lot of female players. There’s nothing we’d put in the way of anyone who wants to join us.”

Lowrie, like other teens in Scotland, learned to drum to Cream, John Mayall & the Bluesbreakers, Muddy Waters, and other rock and blues icons American kids also worshipped. Learning the drum in a Scottish band launches a lifetime love of the instrument, Lowrie said.

“The playing of Scottish traditional music is more lyrical. There are some people who are incredibly expert, their dexterity and speed is mind-blowing. There are even people who are world champions,” he said, tipping his hat to the City of Dunedin Pipe Band, which won the 2018 Grade 2 World Pipe Band Championships in Glascow, Scotland, in August.

For those interested in joining St. Andrew’s Bagpipes, learning a new instrument, and becoming part of something larger then themselves, Lowrie suggests stopping by one of the band’s practice sessions at Christ Presbyterian Church, 3115 Dryer Ave., in Largo. Practice starts at 6 p.m. every Tuesday.