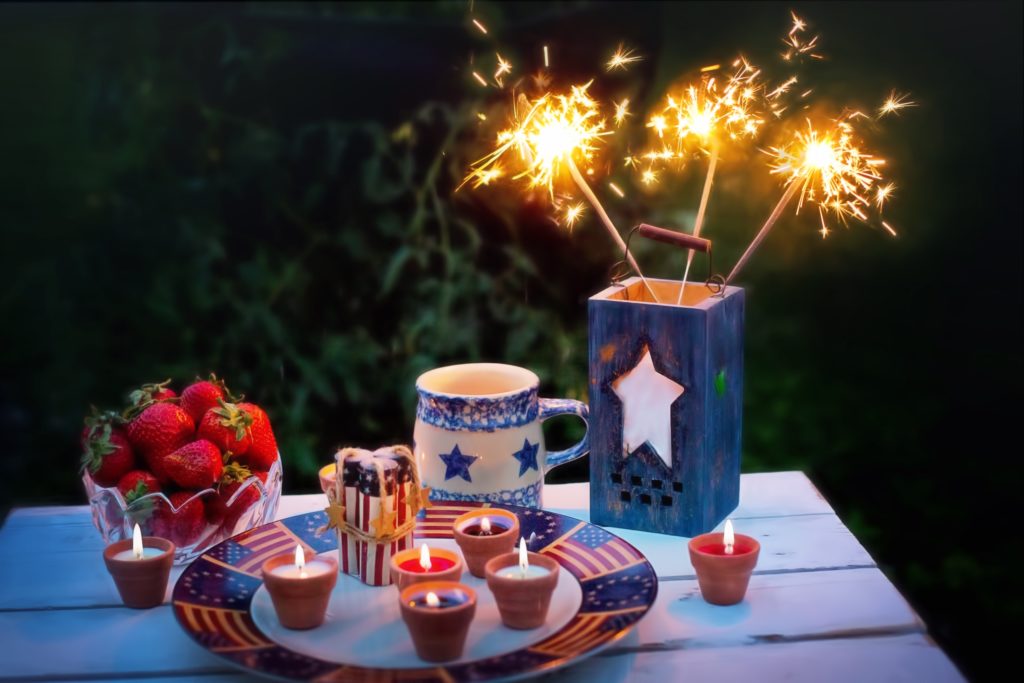 Tampa Bay area residents will mark Independence Day 2019 with a variety of celebrations.

It was July 4, 1776, when the Continental Congress officially adopted the final version of the Declaration of Independence, the document that served to sever ties between America’s 13 colonies and Great Britain. One year later, on July 4, 1777, Philadelphia celebrated Independence Day by adjourning Congress and commemorating the event with bonfires, bells and fireworks. In the ensuing years, that practice spread to other American towns. Americans still mark Independence Day with festivities ranging from fireworks and festivals to picnics and concerts as well as more casual family gatherings and barbecues. Even before the sun goes down and fireworks light up the twilight skies, festivities will be underway.

• Celebrate Independence Day with baseball and post-game fireworks when the Clearwater Threshers take on the Fort Myers Miracle Wednesday, July 3, at Spectrum Field, 601 Coachman Road, Clearwater. Gates will open at 5 p.m. with the game getting underway at 7 p.m. The evening will conclude with a fireworks show after the game.

This is an electronically timed 5K with finisher’s medals for everyone registered, but no age group awards. Awards will be presented to the first 10 males and first 10 females across the finish line. There also will be an electronically timed but non-competitive 3.1 mile run as well as a walk along the Ream Wilson Trail in Clearwater. The course is entirely flat and paved so it is stroller- and family-friendly. A post-race party will be held in the ice-cold air conditioning inside Buffalo Wild Wings.

The run is hosted annually by Xanadu Race Management. For information, text Suzanne at 727-226-7223 or email XanaduRaceManagement@gmail.com.

All finishers will receive the Apple Pie Finisher’s medal, a Race Local shirt, a free food sampler and a free beer for everyone over the age of 21.

The family-friendly event kicks off at 6 p.m. and will conclude with one of the largest fireworks displays in Tampa Bay at 9:30 p.m. There is no cost to attend the event. The evening’s entertainment will include family-friendly activities and a patriotic performance by the Coachman Park Pops Orchestra. There will also be vendors, food and drink concessions and a children’s play area.

Those planning to attend will be allowed to bring a low-profile chair and drinking water. There will be no alcohol served or permitted at the park.

A large crowd is also expected, so consider arriving early. Drivers are reminded to expect traffic delays since the Memorial Causeway Bridge will be closed shortly before, during and shortly after the fireworks display.

Free to attend, the event will feature a night of live music followed by a laser light show celebrating our nation’s independence. The laser light show will begin approximately 9 p.m. Concessions will be available. Attendees may bring a blanket or lawn chairs.

Activities will include the Kids Fishing Derby at the Michael J. Yakes Recreation Complex, 5730 Shore Blvd. S. The derby will run from 8 to 11 a.m. Registration is on the seawall and is free. Registration starts at 7:30 a.m. the day of the event. Participants should bring their own fishing pole. The marina’s staff will provide bait and prizes.

The day also will feature the Family Sand Sculpture Contest on Gulfport Beach from 10 a.m. to noon. Registration will start at 9:30 a.m. Keeping with tradition, the theme will be “All-American Sports.” Participants should bring their own tools and supplies.

At 6 p.m., the community parade will make its way down Beach Boulevard. The best viewing spot is directly in front of the Gulfport Casino Ballroom on the sidewalk.

The New Horizons Band of Gulfport will perform at 7:30 p.m. on the Casino Pad.

At 9 p.m., a fireworks display will close the day’s festivities on Gulfport Beach.

The Gulfport special events trolley will loop the city’s offsite parking locations until 10 p.m., including north of Gulfport Boulevard with the Municipal Marina’s last scheduled drop-off at 9:45 p.m.

The parade will get underway at 10 a.m. on 62nd Street and will proceed eastbound on 54th Avenue until it reaches 58th Street, at which point it turns right and heads south on 58th Street coming to an end at the Kenneth City Community Hall and James Ernst Park, 4600 58th St. N.

Attendees are encouraged to bring a lawn chair or blanket and sit along 54th Avenue, or join friends and neighbors anywhere along 58th Street for this patriotic celebration. Following the parade, attendees can stick around the park for grilled hotdogs, ice cold beverages, and other treats that will be on hand – while supplies last – for a nominal fee.

For information on registering a float, car or other vehicle for the parade, visit www.celebratepinellaspark.com. The registration deadline Friday, June 29, 3 p.m. Although parade registration is free, preregistration is required.

Beginning at 6 p.m., family and friends can enjoy food, entertainment and activities for all ages. There will be a pie-eating contest and inflatables. The fireworks show will begin at approximately 9:15 p.m.

Admission is free. Activity wristbands will be available for purchase on site for $10 each, cash only. Alcohol, coolers, pets, personal fireworks and sparklers are not permitted in the park.

Personal fireworks, including sparklers, will not be permitted at ROC Park. Attendees may bring coolers, chairs and blankets.

There also will be viewing opportunities at Causeway Park and the American Legion.

The fifth annual “Let Freedom Ring” celebration will be held in lieu of that day’s worship services. Under the direction of Dale Williams, PAG organist/choir director and keyboardist with the Florida Orchestra, seven vocalists will perform renditions of “America (My Country, ’Tis of Thee),” “Stars and Stripes Forever,” “You’re a Grand Old Flag,” and other stirring patriotic songs.

There is no charge for this celebration and the presentation is sponsored by the Women’s Ministry.

For information on this and other church activities, call 727-360-5508 or visit www.pagchurch.org.

The parade is open to golf carts, bikes, kids and pups. The lineup will get underway at 8:30 a.m. at the museum, 115 10th Ave., St. Pete Beach. The event is free and open to the public. There will be a scavenger hunt for children at the museum following the parade.

The event will feature live music performed by the Brian Caudill Band from 2 to 6 p.m. followed by headliner Stormbringer, playing until 9 p.m.

Fireworks are scheduled to be launched beginning at 9 p.m. from a barge near the Pinellas County Beach parking lot at the 4700 block of Gulf Boulevard.

Celebrate Independence Day in St. Petersburg’s downtown waterfront as part of the annual Fourth of July Celebration on Thursday, July 4.

Fireworks are scheduled to start at 9 p.m. but can start as early as 8:30 p.m. and as late as 10 p.m. depending on weather. This year’s celebration has a fun, new feature: Enjoy the fireworks to synchronized music that is accessible through an optional, free phone app called J&M Displays. The app works with iPhone and Android systems. The fireworks can also be enjoyed without music.

Admission is free and open to the public. The celebration is hosted by the city of St. Petersburg and the St. Petersburg Parks and Recreation Department. For information, call 727-893-7441 or visit www.stpeteparksrec.org/events.

The American Legion Auxiliary will present its annual Fourth of July Parade on Thursday, July 4, 10 a.m., on Main Street in Safety Harbor.

In the past, this free parade has featured cars, floats, bands, and many other spectacles. Following the parade, there will be a patriotic ceremony at the gazebo at approximately 11:30 a.m. For information, call 727-726-9601.

The city’s Fourth of July Celebration will kick off at 5 p.m.

There will be children’s activities, live entertainment, food vendors and plenty of fun for the whole family. Get a good seat in the marina or the waterfront park for the fireworks display beginning at 9 p.m.

• The city of Tarpon Springs will present the annual Fourth of July Picnic in the Park on Thursday, July 4, 10 a.m. to 2 p.m., at Craig Park, 5 Beekman Lane, Tarpon Springs.

This is the 12th consecutive year of this family-friendly celebration of our country’s independence. The event will feature a live band performing from 11 a.m. to 2 p.m. as well as a hot dog eating contest, waterslides and lawn games. Attendees are encouraged to bring lawn chairs, swimsuits and towels.

• The city of Tarpon Springs will present a Fourth of July fireworks display just after sunset on Thursday, July 4.

The best viewing area will be Fred Howard Park, 1700 Sunset Drive, Tarpon Springs. The park, beach and causeway will be open for parking to view this event. Parking is free after 6 p.m. Parking is limited so come early and enjoy the display. After the park is full to capacity, the gates will be closed for safety. Attendees must observe all of the county park rules and regulations. No alcoholic beverages are permitted in the park.

The fireworks will be launched from the city’s Sunset Beach. For setup and safety, the north end of Sunset Beach and the boat launch will be closed July 4. The south side of the beach and causeway will close at 2 p.m.

Off-site parking will be offered at Treasure Island Park for $15 per vehicle and $25 per RV. Personal fireworks are illegal and will not be permitted on the beach.

Guests will have an opportunity to celebrate Independence Day with an extended fireworks show and thrill rides at night Thursday, July 4, at Busch Gardens of Tampa Bay, 10165 N. McKinley Drive, Tampa.

The Busch Gardens Fourth of July celebration will feature DJs, Summer Nights dancers and the theme park’s thrill rides. Fireworks will begin at 9:30 p.m. The park will remain open until 11 p.m.

• The city of Tampa will present Boom by the Bay on Thursday, July 4, beginning between 4 and 6 p.m., depending on location, and ending after the completion of the fireworks.

Boom by the Bay is a new event featuring fireworks in four locations along the downtown Tampa waterfront accompanied by a variety of entertainment activities. Anchor locations include Armature Works, Riverfront Park, the Tampa Convention Center and Sparkman Wharf.

• Hillsborough River south of Laurel Street and the Fortune Taylor Bridge between Julian B. Lane Park and the Tampa Riverwalk

• The basin in front of the Tampa Convention Center

The fireworks are free to attend, with food and drink available for purchase. There will be a variety of music and family activities in several locations.

The event will feature food trucks, vendors, complimentary bounce park and music. The party will conclude with a fireworks display. The event is free and open to the public.

Among the musical artists set to perform this year are Barefoot Bob and The Hope and Purple Madness.