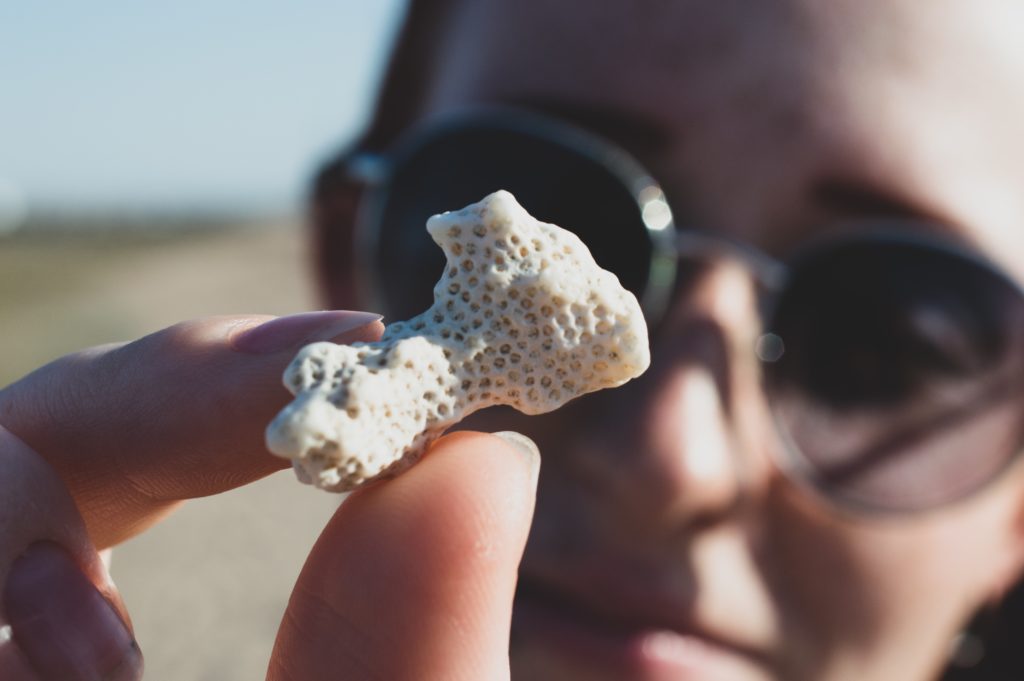 LARGO — By day, Kate Helms works to maintain and improve water quality for the city of Largo. By night, she creates surreal coral reefs — scenes right out of an aquatic fever dream.

While it may seem that Helms lives a double life, one overarching purpose drives the professional artist and stormwater project administrator — to protect and bring awareness to our natural resources.

Helms has also worked for the Florida Department of Environmental Protection and has shown her coral-invaded installations in solo and group shows across the state. Raised by an engineer and an accountant, her parents instilled in her a love of nature with frequent hikes and visits to the Keys — and most noticeably, a die-hard work ethic.

The past year has been a busy one for Helms.

Creative Pinellas chose her tiny underwater home project “Rise Pinellas” as a finalist for its Traveling Community Art Project grant (an award given to SpaceCraft by Mitzi Gordon, Bridget Elmer and Carrie Boucher).

Other recent projects include participation in the acclaimed “Water Over the Bridge: Contemporary Seascape,” a group show this past summer at the Morean Arts Center. Soon after, Hillsborough Community College featured her in the solo exhibition, “Tidewater Elegy,” at its Gallery 221. For both exhibitions and in past shows, Helms created works that juxtapose nature with man-made beauty. She also interjects macabre humor by anthropomorphizing coral with teeth and eyeballs and satirizes the oh-so-Floridian penchant for man-made imitations.

She questions “cultural attitudes about the fabricated environments we inhabit and fetishize to the point of precarious delusion.”

For instance, the massive installation Colony I (created with resin, cloth, sandpaper and found chaise, measuring 74-by-28-by-35 inches) proposes a creepy hypothetical scenario; it foresees the future state of an antique chair in an opulent Florida living room after it’s been submerged for decades — the chair’s former opulence is reduced to an absurd oddity as realistically crafted barnacles overtake it. It’s both a poignant and humorous look at how nature may conquer us if we don’t stop abusing it.

“I haven’t lost all hope and you shouldn’t either,” Helms said during her recent gallery talk at the Morean, adding that her work is not intended as a death knell but a call to action.

Cleaning up the city

Helms’ day job with the city often takes on a similar, broader scope. In a cubicle decorated with rubber aquatic critters and clean water-safety swag, she looks over an interactive GIS (Geographic Information Systems) map of Largo infrastructure, zoomed in on McKay Creek. In addition to her duties monitoring surface and stormwater runoff into local waterways, she educates the public at free events and on social media, and address citizen complaints.

Helms also plays a role in Largo’s sustainability team, which she says was heavily involved in the drafting of the Largo Environmental Action Plan.

Both sustainability and resiliency are priorities, she emphasizes, and she and her colleagues have been working toward solutions that not only lessen the city’s carbon footprint but offer viable and effective alternatives.

“Back in September 2018, we joined the Tampa Bay Regional Resiliency Coalition, and that coordinates climate change and climate adaptation and mitigation activities pretty much throughout the Tampa Bay region,” she explained.

Efforts include mitigation of sea level rise and studying the effects of saltwater intrusion. Locally, goals include transitioning to an all-electric vehicle fleet for light-duty vehicles. They’re also working toward 100 percent renewable energy by 2035.

“We have really ambitious goals to reduce emissions,” Helms emphasized. “So being part of that team has really been a privilege and honor.”

During visits with Helms at the office and in her home studio in Clearwater, she wears cowboy boots — a black pair with a dark pair of jeans and a city of Largo polo shirt for casual Friday at her city job, and a turquoise pair to go with a white prairie dress and a large intricate Native American necklace. The outfits show her two sides as a no-nonsense bureaucrat and more whimsical artistic side, but they share in common a pair of tough boots.

“I started wearing cowboy boots while welding sculpture in art school,” Helms explained. “They don’t have openings or laces to let sparks pass through and cause burns.”

At Helms’ home in Clearwater on Lake Hobart, two doting, mixed-breed dogs — Finn and Charlie — shuffle across the terrazzo floor and wrestle in the back yard, providing her with a steady supply of entertainment and affection. The pups share Helms with a fiancé, a former Marine who works in public relations as a civilian government contractor.

Antique Florida wildlife prints and original artwork fill her home, and Helms converted the lanai into an old-fashioned parlor. She surrounded and covered the patio sitting area with her homemade aquatic creations. Antique mirrors alongside pothos plants in beakers capture Helms’ scientific-artistic aesthetic.

The hard-working artist, scientist and city administrator admits she doesn’t have much of a social life because she’s working on her art when she’s not at the office. She spends hours crafting imitation coral at night and on weekends, using satin and jersey materials, resin, sand and other materials.

“OK, I do give into the occasional streaming TV binge,” Helms admits.

Recent favorites include “The Marvelous Mrs. Maisel” — another tale about a woman who smashes stereotypes to follow a dream.

To see more of Helms’ work, visit her website at katehelms.squarespace.com