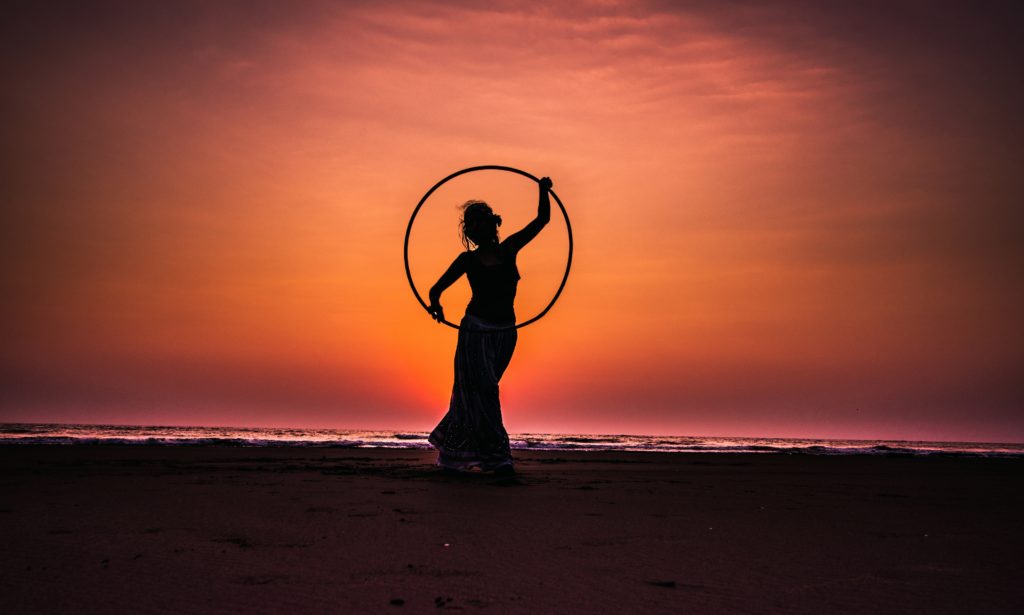 INDIAN ROCKS BEACH — One could be forgiven for thinking a short stroll on Indian Rocks Beach has sent them back in time. On certain evenings the casual beach user will run into something that was popular back in the 1950s: the hula hoop.

In fact, the beach walker won’t be transported back; the hula hoop has been transported forward. Hula-hooping is gaining popularity in new and innovative ways.

Meyer, an occupational therapist who works with seniors, said she got into hula-hooping two years ago.

Meyer then went to Hula-Fit Training, an actual structured program which was certified by the American Council on Education.

“It was then I decided to start the hula-hooping on the beach,” she said. “I have classes three times a week and people from all ages come to work out.”

Meyer said the majority of the people who show up are more than 40 years old, and there are many in their 60s and 70s – the people who would have experienced hula-hooping at its beginning.

The classes are held on Monday, Wednesday and Friday at 7:15 p.m. on the beach at the 18th Avenue access.

“You can burn 420 calories an hour,” she said. “Studies show that if you like something, then you are more likely to stick with it.”

One person who has stuck with it so far is Laurie Rose of Clearwater Beach.

Rose, who didn’t want her age revealed but admits to having been there when the hula-hoop craze was launched in the 1950s, said she knew it was something she had to do.

Rose said attending the hula-hoop classes is a way of meeting people and staying social.

“Trying to be social is not an easy thing to do,” she said.

Rose said picking up the hula hoop was like riding a bike; one never forgets how to do it.

“It was immediate, it just flows, it blew my mind,” she said.

It was so much fun Rose said she bought her own hoop from Meyer, who makes them herself.

Rose is going to continue to attend the thrice-weekly classes.

“Absolutely I’m going to stick with it,” she said. “It is not only fun; it is about fitness. You can’t be stressed while you are doing it. Everybody who sees us on the beach comes over to talk to us and they take up a hoop,” she said.

Hula-hooping these days is different than hula-hooping in the 1950s, said Rose.

“She teaches you different moves and positions,” she said. “It is not just around your waist for an hour.”

A variety of moves is something Meyer prides herself on. Keeping things varied means keeping things interesting.

“We do a warm-up and cover a fundamental move, waist tubing in both directions,” she said. “Then we go into a drill or two with arms. After that we do a series of moves with music and we usually end with stretches and watch the sunset.”

In between those activities there are breaks, and participants are urged to bring water. Older participants can work out at their own speed.

Meyer, 49, pointed out that hula-hooping these days involves all sorts of different activities, including fire-hooping with real fire. She said that is something she might try some day, but she doesn’t intend to bring it to her classes.

Holding classes on the beach in IRB requires a license, and Meyer said she has that, so everything is legal. Cost of a session is $10.

More information on hula-hooping on the beach can be found on the group’s website: www.surfsidehooping.com.

Meyer said she hopes to be around for a long time.

“I’m doing it for fun, and a little extra to help pay off those student loans,” she said, laughing. “It is what I enjoy, and as long as people come, I’ll be out there.