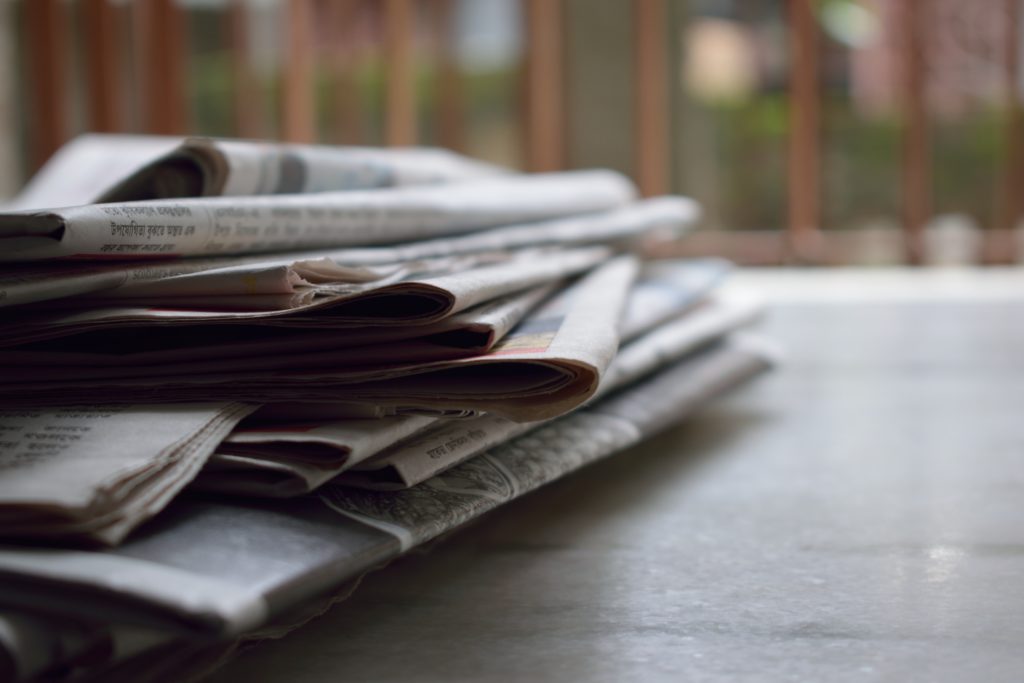 SEMINOLE – When tasked with the job of writing and designing a front page worthy of a second glance, three Starkey Elementary students stepped up to the plate, showcasing an array of talent and creativity.

Tampa Bay Newspapers editor Logan Mosby George spoke to three classes of fourth-graders Nov. 14 as a part of the Great American Teach In, a program that encourages members of the community to teach local students about their job or industry.

George spoke to students about life as a newspaper journalist and asked them to write a story and design a front page on any topic of their choosing.

Three students, Amella Thomas, 9; Miranda Vealey, 9; and Lillian Borchardt, 10, were selected by TBN staff members as having the most creative of all front pages submitted.

Thomas, well on her way to becoming an excellent crime reporter, wrote about a courtroom drama as it unfolded, complete with a judge, jury and guilty verdict.

“Well, I just came up with the idea based on kids I know,” Thomas said of her story and illustration. “They’re (the characters in the story) actually real people in my class.

“A lot of people do crimes – it happens a lot,” she continued. “I just thought I could come up with my own.”

Judges’ comments: “Thomas’ cast of characters was delightful and her depiction of a case of theft could have been ripped from the headlines. All in all an entertaining read.”

Vealey, an ace spot news reporter in the making, chose to highlight the plight of red tide on local beaches and wildlife.

“It was something that was going on and is really important,” Vealey said of the algae bloom that plagued Pinellas County over the summer.

Vealey also said that environmental issues are very important to her.

“My mom always has the news on and I like to pay attention to what’s happening in the world.”

Judges’ comments: “Vealey’s focus on a topic that was not only ongoing but one that had a huge impact on the immediate world around her shows a clear knowledge of current events. Well done.”

Borchardt veered more into the features writing territory when she chose to write about something near and dear to the hearts of Starkey students – the annual holiday food drive.

“I wanted to write about something that was inspiring so maybe others would want to do it too,” said Borchardt, whose story encouraged other students to give to others less fortunate by donating canned goods. “It’s one of the ways we can help other people.”

Judges’ comments: “A heartwarming tale of helping those who need it most. Borchardt’s use of a timely topic, coupled with clean artwork make her front page a must read.”

All three girls are students in Jacquelyn Morgado’s class at Starkey Elementary.