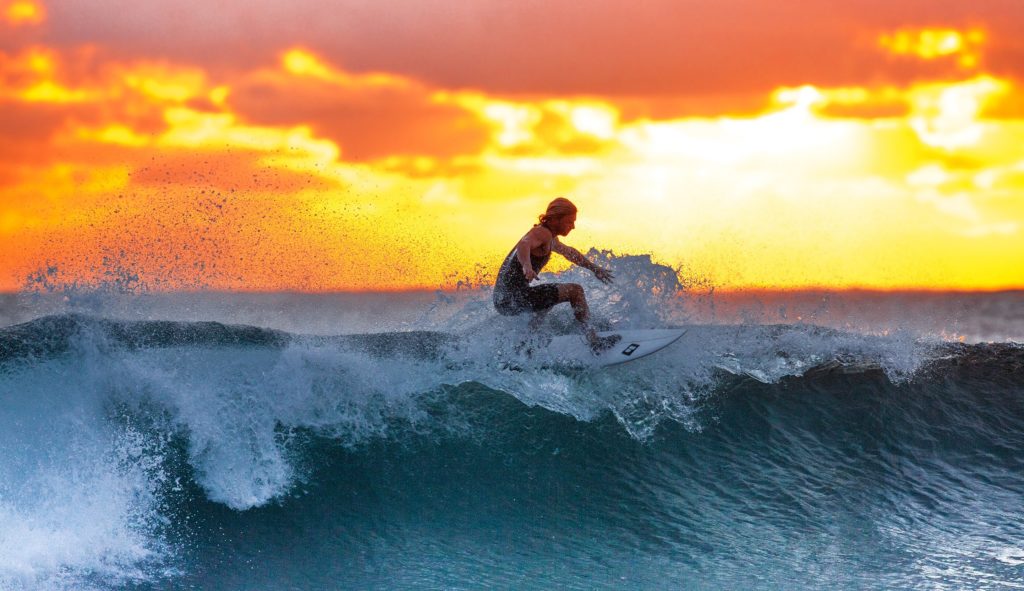 LARGO — Before he could even walk, Logan Hofstetter was in the water.

The Largo native grew up just a short drive from Indian Rocks Beach, where his family, avid beachgoers, spent much of their time.

His father and uncle, professional triathletes, were both surfers as well. So Logan’s natural affinity for the water is in his blood, he said.

As a toddler, he saw older kids skimboarding and insisted on trying it himself. That was the start of his surfing career. Even at a young age, he took the sport seriously. It was more than just a fun way to spend time with family and friends, he said. “It was a way of life.”

Today, the 16-year-old professional surfer calls the West Coast home most of the year. He lives with a host family in Huntington Beach, California.

The former Seminole High School student continues his studies through Pinellas Virtual School and takes some classes at Huntington High School, he said. The rest of his time is spent surfing and training.

“My mom is a teacher,” Logan said. “So education comes first. I have to either get on Honor Roll or all straight As to do my surfing.”

His family is close-knit and the distance can be difficult at times, he added.

“It’s tough not seeing the family all the time. But we get a little FaceTime and I get to see them quite a bit,” he said. “It’s just the sacrifice you’ve got to make.”

The sacrifice is paying off, he added. In the World Surf League’s Men’s Junior Tour, he’s currently ranked No. 30 globally. He also competes in the Men’s Qualifying Series and currently ranks No. 315 in the world.

Last year, he won the National Scholastic Surfing Association’s regional open men’s competition. This year, he’s made it to the semifinals, so far. His goal is to make it to the national finals.

He also plans to compete in more international surf contests with trips to South Africa and Australia set for the coming year.

The move to California was a necessary one as his professional career grew, he said. Florida’s Gulf Coast isn’t known for its strong waves or surfing scene.

“I never really thought growing up on Indian Rocks Beach, where there are waves probably two weeks out of the year, that I would get to this point with surfing,” he said. “Surfing is very minimal here. Only when there’s a hurricane or a storm, a low in the gulf, that’s when you get pretty good surf here.”

Those smaller waves at Indian Rocks Beach were perfect “to really get [him] hooked” on surfing as a child. But it was the annual family trips to visit his uncle in Oahu, Hawaii where he first encountered larger waves that inspired his early dreams of surfing professionally.

Back home in Florida, as Logan began to take surfing more seriously, he and his father traveled throughout the state every weekend in search of the best waves.

“From Jacksonville to Miami,” he said.

The father and son used weather-tracking apps and surfing websites to determine the best waves on any given day. Many of these websites offer a live view of the surf, and predict wind and swell, all factors that helped determine where he would spend his weekends.

“My dad and I were always keeping an eye on that to see if there’s any surf coming,” he said.

Living in California, he’s amazed by the number and size of the waves he regularly encounters in the Pacific Ocean.

“Every day I wake up and there’s waves, even if they’re just 1-foot waves, and some all the way to 10-foot waves,” he said.

On days with smaller waves, he is reminded of home.

“When there are 1-foot waves and it’s super windy, nobody from California goes out,” he said. “I look at it and think, ‘It’s just like home, Indian Rocks Beach, Florida.’ It’s fun for me.”

As he builds his professional surfing career, it’s important for him to represent the Sunshine State well, he said, specifically Florida’s West Coast.

“If you grow up here, you can basically surf anything,” he said. “I try and do my best. I’m always going to be a Florida boy no matter where I am. Florida is in my heart. It’s never gonna leave.”